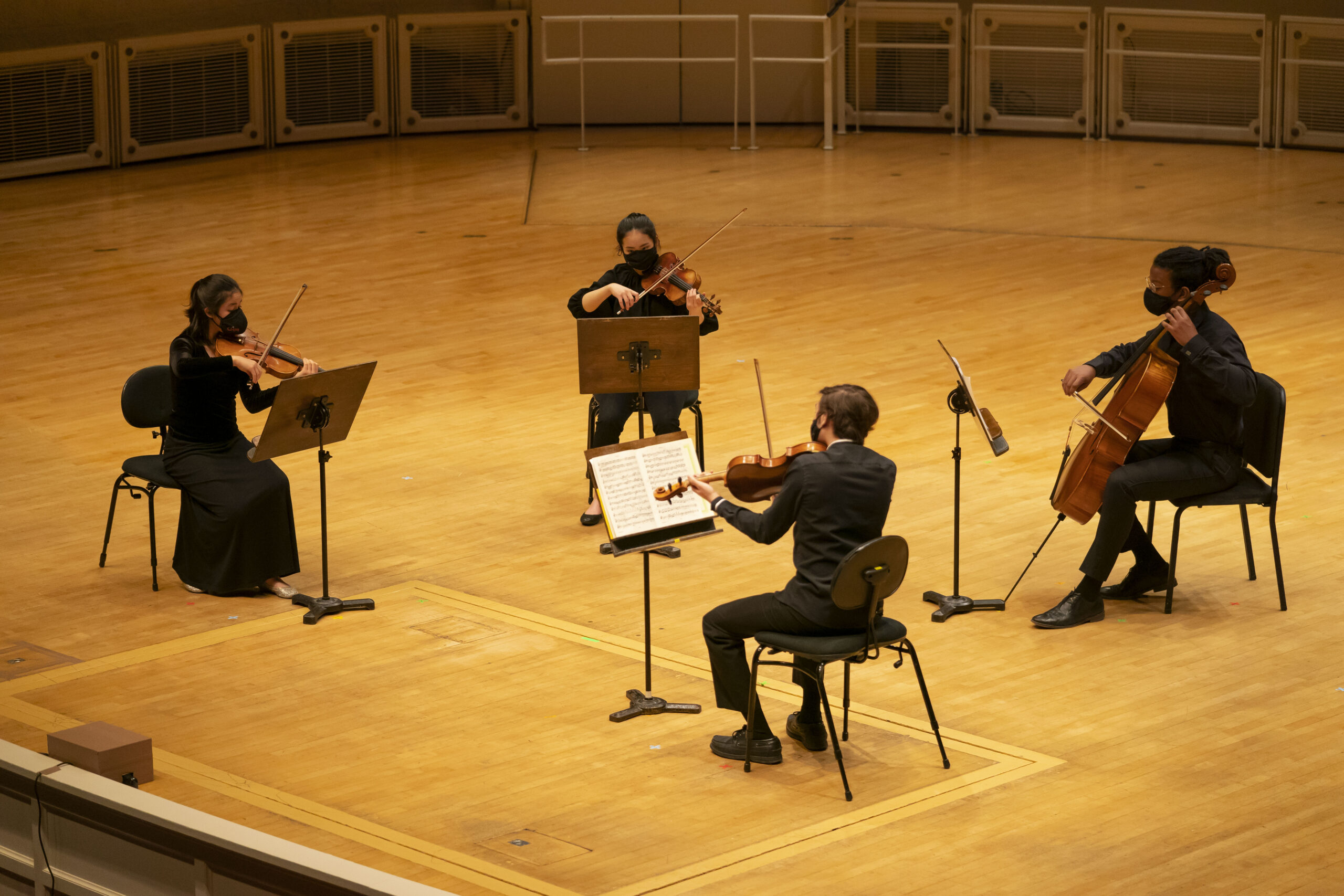 Maestro Muti, Zoom-ing in from his home in Ravenna, Italy, began the class by describing how he missed Chicago and how delighted he was to see musicians on the stage at Symphony Center once again. Then he dove right into the string quartet, describing Verdi’s life during the time he composed the work, and even pulling out the original score in Verdi’s handwriting for the musicians to see. Even before the quartet played, he explained how the main theme of the movement borrows the “jealousy” theme from Verdi’s opera Aida and urged them to play with the operatic passion required.

The focus for the entire class was on the intricacy of the emotions and dynamics in the music — notes, bowings, and ensemble were a given. “Maestro Muti helped us learn how to more accurately and convincingly interpret our Verdi quartet, and really showed us the way we can attach emotions and ideas to the music through understanding things like history and opera,” according to Sameer. “This approach to interpreting a work can really impact the way we prepare and perform pieces in the future, by studying the composer’s life, the composer’s other works, and more.” “His insights taught me the importance of understanding the historical context of a piece in order to better convey what the composer intended,” said Ella. “Maestro Muti has shown me that as musicians, we have a responsibility to emulate to our best abilities what the composer had in mind.”

Esme learned the importance of all the details in the work, “Not only knowing the history of the piece and composer but then exploring how this influences phrasing, tone quality, and the overall inflections in the music.”

After going nearly a half hour over time, Muti fired off a stream of rapid-fire Italian complaints, explaining that he could talk all night about the Verdi piece. The stage was quickly reset for Zachary and the Mozart Oboe Quartet. Once again, the focus was on the emotion of the work.

“The most important thing I learned from Maestro Muti was to really bring emotion into my playing,” said Zachary. “It’s one thing to understand and try to portray an emotion, but it’s an entirely different thing to feel the emotion while you’re playing. Maestro Muti really helped to draw that out of me and I hope to be able to replicate that feeling in the future.” Muti deeply praised Zachary’s exceptional playing and urged him to push further to find the happiness of the movement.

As can be expected, playing on the stage of Symphony Center’s Orchestra Hall, for one of the world’s most eminent maestros, was both thrilling and nerve-wracking for the musicians. “Leading up to the class I was extremely nervous,” stated Zachary. “I honestly don’t think I’d ever been that nervous for anything before. However, once we started playing I felt like I was in the zone and wasn’t nervous at all. All of the excess adrenaline just helped me focus on the music even more.” According to Ella, “Playing for such a well-respected figure in the music world inevitably leads to some pre-performance nerves, but the masterclass itself was extremely engaging and I was very excited and eager to take in Maestro Muti’s knowledge and expertise.”

Sameer and Esme both found the class exciting and fun, and tried not to miss anything conveyed through the Maestro’s quickly moving style. “It was so very inspiring to learn from Maestro Muti; the passion and enthusiasm in which [he] speaks about and teaches music is very infectious,” said Esme. For Ella, “The opportunity to work with Maestro Muti was an incredible experience and insight into the world of professional classical music. I feel that we all walked away learning something new.”

Maestro Muti indicated that he wants to coach all of the students in person once he returns to Chicago. All of the CMPI fellows hope that will become a reality, as the ability to grow from the teaching of someone at the absolute pinnacle of classical music is beyond compare.