Wolfgang Amadeus Mozart (1756-1791) was quite a character, notorious for his crude humor and bawdy vocal canons. Despite his idiosyncratic nature, he was equally skilled in composing instrumental music, sublime religious music, and opera. He composed during the Classical Period, an era sandwiched between the Baroque era and the Romanticism of the nineteenth century.

A child prodigy, Mozart played violin and piano, and spent a large portion of his formative years touring and performing with his father and sister. He began composing as a child and was a prolific composer of more than 600 works before his death at age 35. His output includes concertos and sonatas for numerous instruments such as piano, violin, oboe, flute, bassoon, and horn, as well as operas, religious works, string quartets, and symphonies.

Mozart’s compositions are notable for their dramatic departure from the complexity of Baroque music. He rejected the deeply ornamented, harmonically complicated, and contrapuntal music of the Baroque for a style based more in simplicity, balance, and symmetry. Mozart and his older contemporary Haydn standardized the structure of musical forms from the sonata to the string quartet and symphony, with programmatic modulations from one key to another and predictable harmonic patterns. It was a time when European composers strove to achieve universal appeal through musical works that were accessible to all listeners, no matter what their backgrounds.

For Mozart, the greatest emphasis was always placed on an elegant, singing melody. Any accompaniment parts and harmonies are always subservient to the clarity of the melody. As violin fellow Neal Eisfeldt states, “It is important to pay attention to the subtleties of the bowing to get the rhythm and dynamics, yet maintain the melody and fun [Mozart] always wanted to communicate through his pieces.” He also recommends listening to Mozart’s piano works to get a sense of the style and dynamics Mozart intended.

Oboe fellow Zachary Allen relies on Mozart’s skill as an operatic composer as his inspiration. “Mozart wrote a lot of opera music, and that style carries over into his instrumental works as well. I think that in order to effectively play Mozart’s music, you need to think like an opera singer and not an instrumentalist. Detaching yourself from the technical aspects of Mozart’s music and focusing on bringing out the vocal qualities instead is what makes Mozart so difficult.”

Violin fellow Matthew Gnaden emphasizes the interplay of different characters. “I think the most important thing when playing Mozart is to bring out the different characters expressively. Listen to lots of recordings and try to come up with a story behind the character, and you will have a lot of fun bringing out the musicality for any of his pieces!”

Have you ever heard the first part of a Mozartian phrase, and guessed what came next, even if you had never heard the piece before? This characteristic of especially earlier Classical works comes from the use and elaboration of common musical tropes. In other words, composers frequently pieced together predictable or stock musical fragments, with specific ones used in openings, transitions, or cadences. This technique makes music of this era especially accessible and appealing. Some may recognize, for example, the Jupiter schema seen below, named after the opening of the last movement of Mozart’s “Jupiter” Symphony No. 41:

Of course, composers make these patterns more elaborate, as in this example from Mozart’s third violin concerto, in which he takes a common pattern and turns it into a question-answer phrase. Here’s the pattern:

And here is how he elegantly ornaments what is otherwise a stock stepwise melody and simple chord structure.

Once one starts listening and analyzing for these musical patterns, it is easy to find them all throughout Mozart’s writing. Knowing they are there can help guide performers to determine which notes of the melody to bring out and how to shape a line.

One of the most important aspects of the Classical Period, especially in the works of Mozart and Haydn, was the development of standardized forms. These include both small forms, such as the phrase groupings within a theme, as well as large-scale forms like sonata form. Understanding the form of a piece, especially as it relates to changes in key and phrase structure, can help a performer to develop an overall plan of how to shape each movement.

Common phrase structures used by Mozart include the Period and Sentence. A Period is made up of two parts: a Question and an Answer, often called the Antecedent and Consequent. Both phrases often begin the same, but end differently. The Question or Antecedent phrase sounds incomplete, usually ending on the dominant chord (the chord built on the fifth note of the scale), while the Answer or Consequent ends on the tonic or original chord and sounds finished. This type of phrase structure perfectly exemplifies the Classical Period’s desire for balance, simplicity, and symmetry. See this example from Mozart’s Horn Concerto in Eb: 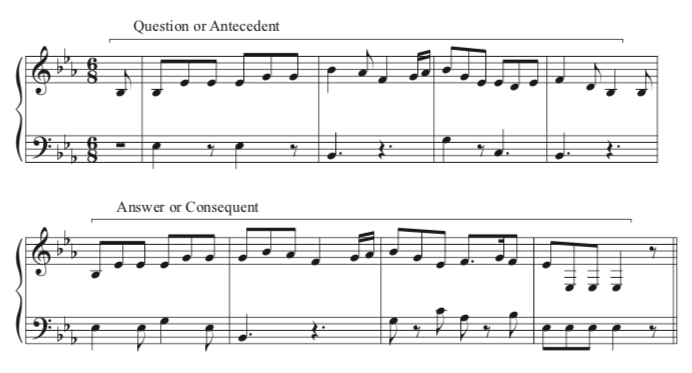 The Sentence is a three-part phrase structure, with a Presentation made up of two short statements in the tonic key, and a third phrase, double as long, that continues or fragments the opening material. See, for example, this example from a Mozart string quartet, K. 464, which has a two-bar theme that is repeated in sequence (up a step), followed by a four-bar continuation. The most important large form of the Classical Period is sonata form, which is a large three-part form spanning a full movement. It includes an Exposition, in which two main themes are laid out, a Development, which fragments and builds the motives, and a Recapitulation that brings back the same material from the Exposition. This type of form is used throughout Mozart’s works, typically in the first movement of his concertos, symphonies, string quartets, and sonatas. It exemplifies the Classical Era’s desire for symmetry and balance.

Other common forms Mozart used include:

When students first look at a work by Mozart, they often say, “Oh, that’s easy.” Yes, the notes are not necessarily hard. But what is exceptionally hard is playing with a perfectly clean, elegant style. As violin fellow Evan Campbell states, “Mozart’s pieces might not be the most technically difficult, but they are pretty hard to play musically.”

For string and wind players alike, achieving a perfectly gallant and clean articulation is challenging. Violin fellow Sameer Agrawal says, “When playing Mozart, you should pay special attention to how notes begin and end, because to achieve elegance in Mozart, you need precise clarity in articulation.” String players often use a separated and lifted bow stroke, especially on the up bow, to achieve a light, stylish feel.

There is some disagreement about what bow stroke or tonguing style to use in fast passages, but in general, thinking about how a singer would sing a passage provides good guidance for performers. As violin fellow Noah Briones states, “I always try to remember that Mozart’s opera’s had a heavy influence on the rest of his compositions. So I have to make the phrasing sing like an opera singer, which isn’t always delicate and gentle. At times it should have a very large and powerful sound.”

It is also critical to make sure to consult an Urtext or scholarly edition when playing Mozart. For example, Mozart was very careful about articulation markings in his works, using two separate markings — dots and wedges — that are believed to indicate slightly different articulations. The dot is simply short, while the wedge is more marked. If your edition has eliminated or modernized these articulations or added numerous slurs, you will have a much greater challenge in interpreting the music.

While often light, Mozart’s music is not without drama — he did, after all, employ the Sturm und Drang (storm and stress) aesthetic in some of his later works, which are more likely to use minor keys and contain emotional outbursts. Some of his operas and sacred music also employ more dramatic elements. For the most part, however, his instrumental sonatas and concertos employ a lighter, more elegant style. Notable exceptions include some of his later works, especially the late violin sonatas, which begin to incorporate a more virtuosic and proto-romantic style.

A Few Notes on Cadenzas and Eingänge

Many of Mozart’s concerto movements are intended to have a cadenza, and some also include spaces for an Eingang, a German term that means “lead-in” and can be thought of as short passage played as an embellished fermata that leads to the next section. During Mozart’s time, most cadenzas were improvised on the spot, but currently, most students play composed cadenzas. Make sure to choose cadenzas wisely, as many cadenzas available are either stylistically inappropriate or way too long! Performers who are interested in composition may want to attempt to write their own cadenzas. For Eingänge, even younger students may be able to improvise or compose their own short ornamentations.

Performing works by Mozart allows players to find the beauty in simplicity, and the elegance of melody. Here are a few inspiring performances by CMPI fellows.